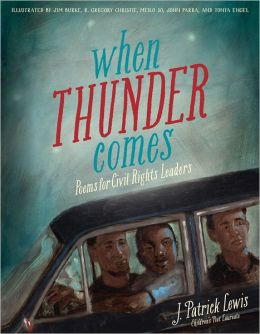 Today, my long-overdue revue of J. Patrick Lewis's marvelous collection, When Thunder Comes: Poems for Civil Rights Leaders, which is illustrated by five different artists: Jim Burke, R. Gregory Christie, Tonya Engel, John Parra, and Meilo So. (My apologies to the illustrators for not including them in the subject line as is my usual practice, but it got a bit unwieldy, I'm afraid.)

Pat Lewis has provided eighteen poems in this book: an introductory sonnet (using the Shakespearean format) that begins as follows:

The poor and dispossessed take up the drums
For civil rights--freedoms to think and speak,
Petition, pray, and vote. When thunder comes,
The civil righteous are finished being meek.

The seventeen people profiled in the book range from well-known civil rights activists such as Mohandas Gandhi, Coretta Scott King, and Nelson Mandela to lesser-known people, including Mitsuye Endo, who fought against Japanese internment in the United States during World War II, and Dennis James Banks, co-founder of the American Indian Movement, who fought for Native American rights in the U.S. Both the dead (e.g., Mamie Carthan Till, mother of young Emmett Till, and baseball players Josh Gibson and Jackie Robinson) and the living (e.g., Nobel Peace Prize winners Aung San Suu Kyi and Muhammad Yunus) are included.

Here is the two-page spread for "The Statesman", a poem about the long captivity of Nelson Mandela, now the former President of South Africa, illustrated by Jim Burke: 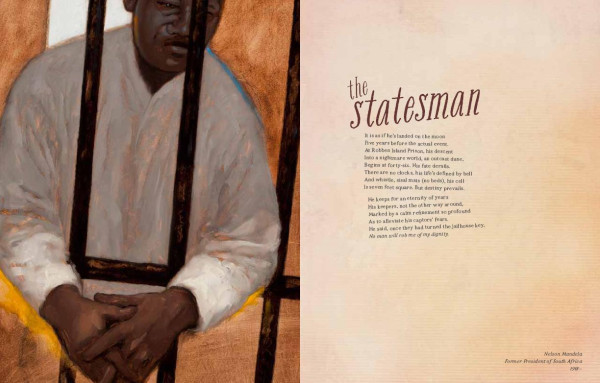 The Statesman
by J. Patrick Lewis

It is as if he's landed on the moon
Five years before the actual event.
At Robben Island Prison, his descent
Into a nightmare world, an outcast dune,
Begins at forty-six. His fate derails.
There are no clocks, his life's defined by bell
And whistle, sisal mats (no beds), his cell
Is seven feet square. But destiny prevails.

He keeps for an eternity of years
His keepers, not the other way around,
Marked by a calm refinement so profound
As to alleviate his captors' fears.
He said, once they had turned the jailhouse key,
No man will rob me of my dignity.

One of my favorite poems in the book is the one about Harvey Milk, who was the first openly gay man to be elected to public office in the state of California, back in the 1970s. Although the poem does not mention it, Milk was shot and killed while still in office. The spread is illustrated by Meilo So. 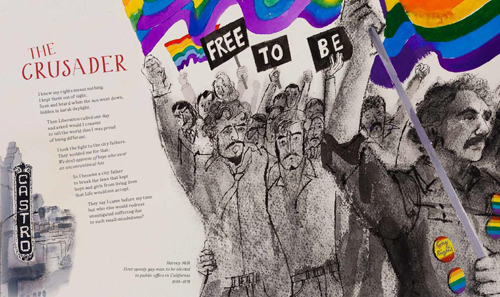 The Crusader
by J. Patrick Lewis

I knew my rights meant nothing.
I kept them out of sight.
Seen and heard when the sun went down,
hidden in harsh daylight.

Then Liberation called one day
and asked would I consent
to tell the world that I was proud
of being different.

I took the fight to the city fathers.
They scolded me for that:
We don’t approve of boys who wear
an unconventional hat.

So I became a city father
to break the laws that kept
boys and girls from living lives
that Life would not accept.

They say I came before my time
but who else would redress
unmitigated suffering due
to such small-mindedness?

You can read a great interview with Pat about this book over at Chronicle Books's website. My thanks to Chronicle for sending me a review copy of this wonderful, wonderfully important work.